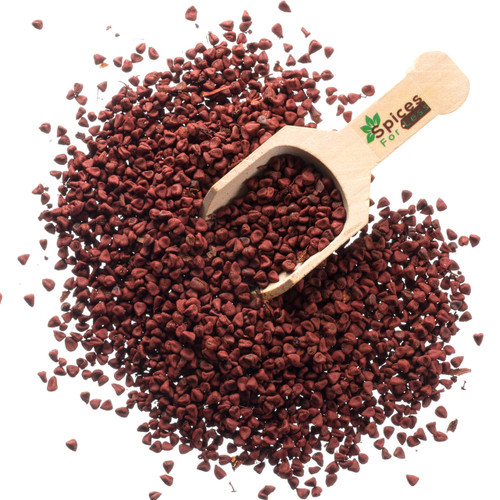 Product Info:
Annatto Seed, Bixa Orellana, is the seed from a flowering tree of the Bixaceae family. This tree is also known as a lipstick tree, as much of the red color found in lipstick is derived from the dye found in the pulp which surrounds the Annatto Seeds. As a Spice Annatto is used most often in the Caribbean and Central America. Besides coloring foods Annatto also imparts a mild flavor. Annatto Seed is also an ingredient in Achiote Paste. Annatto Seeds are small triangular shaped, about 1/2 cm wide, and velvet red with a soft texture.

Basic Prep:
Annatto seed oil is a common ingredient in Caribbean cuisine. Heat 1 cup of grape seed oil, add 2 ounces of Annatto Seeds and cook for up to 5 minutes (until the oil turns orange). Strain the seeds out and refrigerate.